Three updates, one in graphics and two in gameplay.

Graphics: new water shader! Thanks to Panda3D's new built-in support for user clip planes in the shader generator, the reflections were a piece of cake. It's a very basic shader that simply deforms the render buffer and the reflected render buffer, then blends the results 50-50. No fresnel, no lighting, nothing. It works, though.

Using the distortion shader from my last post, I added a shield droid that puts little shields around team entities in its vicinity. The shields decreases ranged damage by 25%.

Which brings me to the next item: the new "Claw" melee weapon. It's basically a giant claw that can do 100 damage points, where most characters have 200 HP. The catch is, you can only use it once every few seconds, and you have to be in the air, a few feet away from your target, pointing pretty much right at it. If you get all that right, your droid lunges forward, whips out this huge claw (with a pretty nifty animation, I might add) and shanks the target. Otherwise, it makes a sort of "fail" sound and half-heartedly stabs at the air. And of course, the new shields are powerless against it.

Here's a screenshot showcasing all three new features, along with a new, stripped-down map. You'll also notice I added colored halos around the droids, for easy target identification. 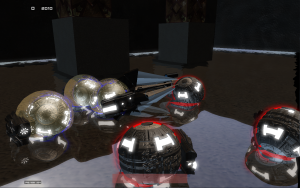